Anita Gates has the obit for Arthur Kopit, playwright of Wings (1978), a piece that really deserves to the produced more often.

And Miami Valley Today graciously comped us an obit for Mom. Mom worked at a predecessor paper, the Piqua Daily Call, at the turn of the 1960s.

Mom’s obits in the Dayton Daily News and Sacramento Bee are up. 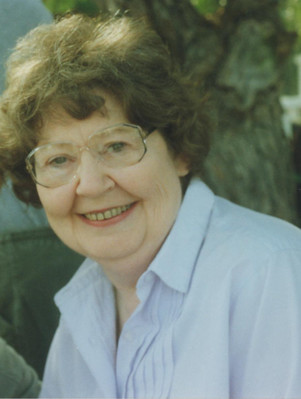 My mother wasn’t an especially sophisticated woman. Esquire magazine and Champale she considered a little too racy. When I was in high school in the early 1970s, she squawked at me for carrying hot tea in a thermos to school because it “looked affected.” But she was a good person, a mensch.

Most of her family knew her as Eileen. Her nameplate where she worked usually said Doris Gorsline. Some of her newspaper work she signed Dodie. Early on, she sold some joke material under the carefully-chosen gender-free pseudonym of Pat Petirs.

My mother was born in a small city in the Miami Valley of Ohio to Bessie and Louis, both of them garment workers; Louis went on to become a union electrician. She came west to California after finishing high school, just after World War II. She met my father there, moved to New Mexico to start their family, split with my Dad and moved back to Ohio, and raised me in Dayton (and places you can see from there) as a single mother. After I left for university, she spent some time working in Cincinnati, then at the end of her working life returned to Sacramento. She would probably tell you it was for the climate, but I think the real reason was that her best friend Janice was there—they were genuine BFFs, all the way back to school in Ohio. And when she settled there she made more new good friends.

What a person saves, keeps by her, says quite a bit about her. When she moved to assisted living about fifteen years ago and my cousin Rita and I cleaned out her apartment—well, she’s a packrat like I am—her keepsakes spoke loud and clear: friends and family and relationships. Postcards and letters and so many, many photographs. Blank notecards for the sending. Bus schedules (I kept those) and rubber bands and pennies squirreled away everywhere. Her doll collection: what I admire about her collecting is that she didn’t keep her treasures sealed up lest they lose value; she had them out so that she could enjoy them. Of course, her own clippings from stories she’d published.

My mother accomplished a lot—in the middle of the Mad Men era—by writing full-time for a city evening newspaper, the Dayton Daily News. When I would visit her at work, I remember soft #1 pencils and cheap yellow typing paper and pneumatic tubes for moving copy around the building. Mom wrote her share of lighter features, but she wasn’t trapped in what they used to call the women’s section. Early on, her editor told her she’d need to drive to her assignments. One problem: Mom hadn’t learned to drive. So, in her thirties, she took lessons and her driver’s test—and turned it into a story for the paper. Then, later, it was too expensive to send both a reporter and a photographer out, so she learned to make her own photographs.

I wish I could have known her when she was a wisecracking twentysomething, selling gags to 1000 Jokes magazine; or when she flouted convention and summered at a writer’s colony in New England (and had her own lovesick suitor to follow her home to Ohio); or when she was a young girl in the Depression, wheedling a dime from her parents to see the new Shirley Temple movie. She drew comic strips for her own entertainment; and then, in a prescient bit of post modernism, came back to them years later and marked them up, annotating the poor draftsmanship and faulty story-telling. There was a bit of Lynda Barry’s Marlys in her: dance, draw, do whatever you are moved to do, and don’t worry about who’s watching.

We were never well-off, just somewhere-in-the-middle-class, in a succession of rented bungalows in the Dayton suburbs, but in the best public school district in the area. She had the wisdom to listen to what I needed, and did what she could to provide that. And otherwise, with an occasional nudge, she let me solve my own problems.

Truth to tell, she spent a lot of her life doing what other people expected of her, and perhaps that is her small tragedy. She started her writing career, in part, because a teacher in high school thought that she could and should be a writer. Her professional life and avocation evolved over time, as she moved from the humor columnist to the reporter to the P.R. manager. Fairly late in her career, she completed her undergrad degree in communications at what is now Mount St. Joseph University. And she continued submitting fiction and nonfiction to the magazines, with some success. She never stopped trying to figure out what being a writer meant to her.

We went to the movies together: we both loved golden age musicals and Robert Altman’s Nashville (and a certain epic centered on a plantation called Tara that we will pass over for the moment). We went to the library, first the Flesh Public Library in Piqua then the big downtown library in Dayton. We listened to music: we liked Van Cliburn’s piano and Bobby Darin’s pop and Henry Mancini’s movie scores. We had a few comedy albums that we wore the grooves out of: Bob Newhart as a monologist; Mike Nichols and Elaine May as a team. When the Beatles were beset by the “Paul is Dead” rumors, we scrunched next to the stereo, trying to hear the messages coded in “I Am the Walrus.”

We traveled the country by intercity bus and passenger train. We would go to Cincinnati just to visit the ice cream parlor set in the pedestrian bridge joining the two buildings of Pogue’s department store. New York for the World’s Fair in 1965: I was subway-smitten and wanted to ride the 7 train out to Flushing and the fair, but she more sensibly found the dedicated shuttle buses. California and Tennessee by train, to see family and friends. Washington, D.C. by bus in ’64. Parts of the original Greyhound terminal on New York Avenue, N.W. that we used is now under historic preservation, so it will always be there as a souvenir of that good time.

That’s something I learned from her: riding the bus may not be cool, but there’s nothing wrong with it. It’s cheap and efficient.

And I learned my liberalism and tolerance from her, as imperfect as it may be. She had Jewish colleagues and thought nothing of it. In most of the neighborhoods we lived, African Americans were scarce, but I was taught early on not to dwell on superficial differences. She would proudly tell the story of our Washington visit, when we toured the Senate chamber while the Civil Rights Act of 1964 was being debated. On the other hand, I’m not sure what she would make of some of my theater friends, but anyway…

Her heroes were two: fellow Miami Valley humorist Erma Bombeck; and Ingrid Bergman as Joan of Arc in the 1948 film: a woman alone, armed with her faith.

One day, I was telling Leta about my mom’s career, her successes and incompletions, and Leta said, “If success is measured as making a better life for your children, then she was very successful indeed.” Yes. She was a bang-up success.

Thank you, Christo and Jeanne-Claude, for your gift of The Gates.

When we find the right friend at the right time in our life, or the right teacher, or the right student, our lives are changed forever. Max was the voice that answered back. And he still is.

Barbara Harris, owner of the closing moments of Nashville, has taken her last bow.

“A Letter from the End of Days (Come In. Clean the House. We Have Died.)” by Malachi Black, at Poetry Daily.

… there is nothing else

to help you. There is no one here
at all.

Dara Weir’s “in the still of the night” at Poetry Daily.

I received word that Steven Mead Johnson, whom I portrayed in The Laramie Project in 2004, has passed away, by way of a friend of Steven’s. In reply, I wrote,

I was saddened to learn of Steven’s passing. He was such a gentle, dear man. We had the very good fortune that he was living in Reston at the time of our production, as he was pastor of a local Unitarian congregation. He was able to meet with us and thus to deepen our understanding of the people of that rugged, remote place in Wyoming. And I rather think that he was good-natured about my borrowing of some of his physical mannerisms.

A trunk holding a suitcase holding a holdall,
The travel equivalent of the turducken…

Richard Bolles has passed away. Early in my career, as I blundered my way into writing software for a living, I turned to his books for guidance. I’m not sure that he provided any specific, useful advice, but I was reassured: it always felt like he was in my corner.

It turns out that he spent a good part of his early life as a clergyman in the Episcopal church. Leta would say, “of course.”

Hosted by DreamHost, with special thanks to Brett. Header via Google Fonts. Copyright © 2021 David L. Gorsline. All rights reserved. The opinions expressed here are my own, and not necessarily those of my employer or any other organization.