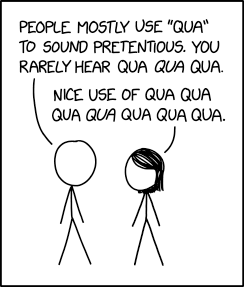 Sam Beckett has an answer to that.

For the last four-and-a-half decades of my life, from late teens to early sixties, I’ve had the nagging feeling that there ought to be a Latin scholarly expression that one could use when presenting the correction of an erroneous word or words in quoted material alongside the error itself.

A (more or less) newly-described means of animal reproduction, featuring my friends of genus Ambsytoma, and Mark Liberman is curious about how the term was formed: kleptogenesis.

All of the burrowing animals, the geofodes, enter a very different world, which exists only a very short spacial distance from the actual desert environment itself.

Geofodes appears to be a coinage by Cowles, deriving from geo and the Latin fodere that gives us fossorial. Or perhaps it’s a slip, because his book went to press posthumously. At any rate, it ain’t in my dictionary.

Linda adjusted her position to face the trees…. The powerful drum of a beak against dead bark carried through the woods and she scanned the overstory for a pileated woodpecker. It flew a series of arcing loops and landed in the boughs of an ash tree. Below it grew crinklefoot ferns. A row of Queen Anne’s lace swayed in the ditch.

Any idea what Offutt means by crinklefoot fern? Anyone? The only thing botanical that turns up for me is Crinkleroot (Cardamine diphylla)—not a fern by any stretch.

Sean Wyer unpacks a word that has always puzzled me: naff.

Nonetheless, not all naff old things are made naff by the passing of time. Clippy, the Microsoft Office paperclip, appears anachronistic now, but was in fact always naff, because to my knowledge he never succeeded in carrying out his one job, which was to help you in any way to write a letter.

Although I’m not sure I agree about snow globes.

In my junior year I presented a skit at the Press Club Vod based on the idea of how closely allied jazz dancing was to the jungle.

What the heck is vod in this context? de Mille is writing of a time ca. 1925.

Still on the trail of the meaning of Hollanderize: Consider this exchange between MSgts. Pendleton and Bilko from s1e23, “Army Memoirs,” of The Phil Silvers Show (air date 21 February 1956). Pendleton, at the moment (five minutes before he was in a different frame of mind), is buttering up Bilko, offering him alterations on a newly-arrived flight jacket with white mouton (sheepskin) collar. Pendleton asks, “Do you want the collar Hollanderized?” to which Bilko replies (approximately, he’s talking over a laugh and about to do a take from Capt. Barker’s entrance), “No, keep it fluffy.”

So, Pendleton is not offering cleaning of a new garment, and cutting it down doesn’t make sense. Perhaps he is indeed offering a dye job, which Bilko rejects because it will mat the pelt.

“I’ve been working on a podcast for the last year and trying to learn everything I can learn about that form of storytelling, as a matter of history, so, if I’m out walking, I listen. Though, to be fair, this started a long time ago when someone gave me an iShuffle or whatever that thing was called, that thing you wore around your neck on a lanyard, and I was teaching Tristram Shandy that semester so I ordered the audiobook and then, by mistake, I listened to the whole thing on shuffle play. Without realizing it. Only later did I come to understand this is what Sterne wanted! In 1767!”

—Jill Lepore, “By the Book”

Anne Fadiman, of my generation and fellow sentence-diagrammer, distinguishes the nonbinary they and the generic singular they and makes a persuasive case for both.

The ball opened with a country-dance, in which Mr Rivenhall, in honour bound, stood up with his cousin. He performed his part with propriety, she hers with grace; and Miss Wraxton, watching from a route-chair at one side of the room, smiled graciously upon them both.

Hey, internet! Any idea what makes it specifically a route-chair? Foldability/portability? Does it look like a ballroom chair? A director’s chair? A campaign chair?

‘You won’t mind if I shake the fidgets out of his legs!’ Sophy called. ‘He is itching for a gallop!’

With that, she wheeled Salamanca about, and let him have his head down the stretch of tan that lay beside the carriage-road.

My old print Oxford doesn’t have anything for tan in this context, but Webster II has

6. A path or track covered with tanbark, as a circus ring.

1. Any bark rich in tannin, bruised or cut into small pieces, and used in tanning. Spent tanbark is used for circus rings, race tracks, etc.

the tannin-depleted bark still holding onto some of its chemistry, and thus slow to degrade.

Which perhaps explains why so many parks feature a Tanbark Trail.

This is from a Charles Mallison chapter of The Mansion. Page number is from the Library of America edition.

That was last spring, in June when he [Gavin Stevens] and Mother (they had lost Father at Saratoga though he had promised to reach Cambridge in time for the actual vows) came up to see me graduate in Ack. and I said, “What? No wedding bells yet?” and he said:

“Not mine anyway:” and I said:

The context and the capitalization hints that Ack. is a building on the Harvard campus, but I can find no appropriate edifice on today’s maps. Rather, I suspect that it is part of the ceremony of conferring Chick’s law degree. There is the legal practice of acknowledgement in the sense of making a declaration. Perhaps Charles must make a vow to become a (good?) lawyer?

Perhaps one of my lawyer friends can help me out.

Also, that stray colon at the end of Gavin’s “Not mine anyway:” bothers me.

Two unusual usages in The Mansion, as far as I can tell. Page numbers are from the Library of America edition.

So they would reach that side by side anyway—the vast dim home-made columned loom of her father’s dream, nightmare, monstrous hope or terrified placatement, whichever it was, whatever it had been… (chap. 15, p. 652)

It’s clear from context that placatement is a near-synonym for placation, but an entry for placatement does not appear in my dictionaries.

He didn’t know why; he could not have said that, having had to do without privacy for thirty-eight years, he now wanted, intended to savor, every minuscule of it which freedom entitled him to… (chap. 17, p. 692)

Minuscule is certainly a legitimate noun, in the senses of “script” or “small letter.” But William Faulkner’s use of it to mean a tiny portion is perhaps unique, and quite tasty therefore.

Hosted by DreamHost, with special thanks to Brett. Header via Google Fonts. Copyright © 2022 David L. Gorsline. All rights reserved. The opinions expressed here are my own, and not necessarily those of my employer or any other organization.